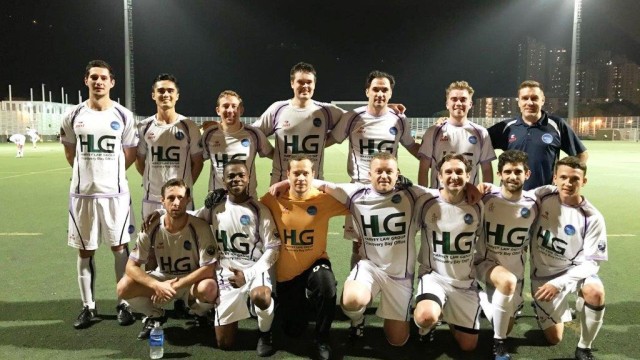 DBFC were back on the old astro-turf at Po Kong Village Road Park Football Pitch and were looking good with 15 names down to play. However, 30 minutes before kick-off two late drop outs and two advising late arrival at half-time meant we started with the bare 11 players and that was thankful for Thierry’s plane landing on time and him coming straight from the airport. Manager Gaz was a little anxious as he eyed the kit bag ready to get changed and worked his phone messaging Matt H and JB to speed up their arrival.

DBFC started very disjointed and their play was breaking down quickly between midfield and the forwards but the DBFC defence, marshalled by Thierry and David, were firm and Corinthians just didn’t look like breaking through. The one only half chance that Corinthians had on the DBFC goal was when their left winger got to the by-line and rolled a cross in the DBFC six yard box that somehow David and Thierry missed as they were wrong footed and as the ball was sitting up for an oncoming Corinthians player when Morse go his toe on it to direct it safely away (as it ended this was the only chance that Corinthians would see in the whole game). Chance after chance started coming DBFC’s way with Scott Holmes at the thick of things. Darius was running riot down the right and putting in a number of great crosses that players just couldn’t connect with. Scotty was put through one on one with the Corinthians keeper (Gianluca) but his powerful shot towards the top corner was smothered with a great save. Scott Holmes again received the ball with back to goal and turned the Corinthians centre-back at 20 yards out to be free on goal but Scott elected to try a fancy distance chip as Gianluca was off his line. The ball went wide and the crowd went silent not understanding why Scott didn’t run it into the empty Corinthians box for a closer shot (Showman Scott). DBFC were easily on top with the back four cutting out any glimmer of attack Corinthians thought of. Pascal and Mr. versatility (Christian) were dominating the middle of the park, Danny was doing his usual dynamo activity in the hole to support the ubiquitous Scott up front. Mac was solid on the left and Darius on the right always penetrating. However, with 10 minutes to go until half time Mac came off for a breather to allow the just arrived Jordon to test the Corinthians right back. The pace of the game suddenly shot up boiling point and JB was running riot: he hit the side netting with a shot, drove a great cross to the far post that Scott somehow headed over the bar, fired in a cross that Pascal poked in the net only to be ruled unjustly off-side and put in a pass to Christian to slot through the Corinthians defence for Scott to run onto and coolly shoot past Gianluca to eventually get a well-deserved goal. Corinthians were happy to see the end of the half having only conceded one goal.

At half time talk Gaffer Gaz simply asked for more of the same to make the game comfortably our win. Scott Holmes came off, after a great half for his rehabilitation comeback from calf injury, and Mac went back on up top with Matt Hoare, who was coming on to replace a spent Matt Mills, who put in a great shift as part of his footy fitness plan; Danny Loup moved to right back.

The second half kicked-off and DBFC were well in control, pressing the Corinthians goal with every phase of play. Corinthians were pinned back and their only hope seemed to be punting the ball forward for their lonely attacker to chase. The pace and skill of Darius, Jordon, Mac and Matt H attacking was causing Corinthians defence endless problems. Pascal and Christian in midfield were mopping up everything and controlling the play. The DBFC back four were recycling the ball brilliantly, using the full width of the pitch to switch play between the right and left wings. All that was needed was to convert the dozens of chances into goals and this was proving very difficult against an inform Corinthians’ keeper (Gianluca). The DBFC second goal came at 10 minutes in when some great dribbling skill by Darius down the right got him to the Corinthians by-line and he fired in a deep cross that JB met at the far post to squeeze in a header passed an on-rushing Gianluca. DBFC now at 2-0 up pressed harder and had more and more chances with a number of one on ones being missed. The third goal did eventually come after JB moved into the centre forward position and Mac to the left wing. Mac collected the ball on the left and ran at the Corinthians right back before turning inside to slot through a defence splitting pass into space for lightening JB to collect and eventually beat Gianluca at a one on one. DBFC were now 3-0 up and looking for many more goals in the last 20 minutes. Corinthians were trapped with all but one player defending. Cross after cross and penetration after penetration just couldn’t get the ball in the Corinthians net. JB had numerous more chances to get his hat-trick, the best being at the end of some fantastic football that started in the DBFC back line. The ball was played by Thierry to Danny on the right then it came back through the back line to Morse on the left, he played it forward to Mac who played it in to Matt H, back to Mac who turned it in to JB. JB played it back to Mac who penetrated to the 18 yard box and dinked it sideways to Darius who had ventured infield to mix with the action. Darius’s quick feet played the ball to the right into the box for JB, who had peel round into the space, to collected the ball 10 yards out to fire a shot wide of the closing Gianluca but unfortunately inches wide of the post. This super-fast play deserved a goal. Other notable misses were Matt H one on one and tried to dink it over the oncoming keeper but the keeper’s fingers sent it just wide of the post and Mac, literally 1 foot off the Corinthians goal line at the far post, allowed a Matt Hoare cross to bounce between him and the goal post at waste height. This seemed impossible to do but Mac somehow couldn’t get his legs up, his pelvis forward, his head down or his tool out to knock it in. The game finished 3-0 and Corinthians got away without an embarrassing score line.

MOM: A number of contenders for this award; Christian again for another strong display, Jordon for coming on just before half time and changing the momentum of the game for DBFC to completely dominate, Mac for a tremendous energetic performance and Darius for his none stop surging runs that were terrorising the Corinthians defence. Darius gets it this week.

DOD: Shouts go to Mac for failing to knock the ball into the net from 12 inches out, Jordon for being nutmegged twice in succession, Pascal for arguing with the Corinthians keeper after the game about a high challenge before telling him to “go away back to his Shite team” and Syd for messaging Gaffer Gaz at 3:15 am Saturday morning to say he’d be coming to play then messaging again at 1:00 pm the same day to say that it was a drunken decision and he was not any longer fit for play. However, for the 2nd week in a row the award goes to Christian, who, just after Jordon had come onto the pitch, signaled to Gaffer Gaz rubbing his tummy and arse at the same time before dashing off the field straight into the toilets. He’d been holding in a giant jobby until we had a substitute and couldn’t last the 10 minutes extra until half time.

Eleven of us made it back to the Pier Bar for beers and a few shots of tequila dished out by Judge Morse for some dodgy charges. It was a double celebration because at the same venue on the other pitch Forward drew with Mes to drop 2 more points and put us in striking distance of the top league position. 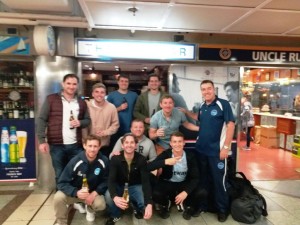