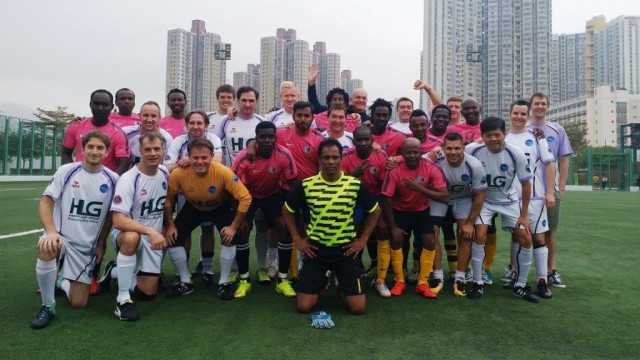 At Chinese New Year it always gets a little boring for those staying in Hong Kong and not wanting to holiday at this expensive time of year. So it’s been usual for DBFC to organise an internal DBFC game among members. However, this year DBFC took this opportunity to organise a friendly match against United Colour of Christian Action (UCCA), which is a team of young men living in Hong Kong on refugee status. They are from the Centre For Refugees (CFR), which is backed and supported by the charity group, Christian Action and it is a CFR volunteer, Mike Rose that has pulled them together with purpose, to find teams and clubs throughout Hong Kong that can provide a football pitch and a little money to get the guys there and back. These guys thoroughly enjoy any opportunity to play football. This was DBFC doing their bit to give back to the less fortunate.

Everyone from both teams arrived at Tsing Yi NE Park early (except Pat Dougan would you believe) on a sunny and warm holiday morning. It was significantly warmer than it has been in Hong Kong over the previous weeks. The teams got together for a photo opportunity that portrays the real friendly atmosphere that lasted throughout this game. Steve Rudall, four months into his recovery time from crucial ligament surgery kindly offered to be referee for this game and made an excellent effort at overseeing proceedings while hobbling around the pitch (he covered 6km apparently, which is not bad for a bloke with a dodgy leg).

DBFC kicked off and were a little disjoined but soon settled to pass the ball around. UCCA had some speedy guys that closed down quickly and their defence frustrated DBFC. However it was after 10 minutes that DBFC got the first goal when play from midfield found Rodders, who had drifted in from the right side and he put a pass through the UCCA defence into the 18 yard box for the on rushing Ingham. It looked like Rodders pass was over hit and that the UCCA defender would get there first but Chris (never give up) Ingham got there first to flick the ball on passed the defender’s foot, which only managed to stamp on Chris’s heel and bring him down. It was a clear penalty that Chris would have argued at taking if he didn’t have to limp off the field for treatment. Thierry step up and confidently blasted the ball into the net to put DBFC 1-0 up.

Not long after that some well worked play down the left saw a one two played by Rainer for Chris to return a difficult high ball that Rainer superbly run onto and cracked in a volley, only for the referee to rule off-side. This didn’t put DBFC down and some 10 minutes later, after a series of corners, one corner ended up with the ball bouncing around the box for Chris to muscle in on and put his foot through the ball to blast it into the top of UCCA net. DBFC were now 2-0 up and took the foot off the pedal. This allowed UCCA to pass the ball around a bit and their lively midfield dribbled into the DBFC centre-backs and up against Steve W whose tackle was a bit after the ball. The ball rolled through to the UCCA forward on the right of goal at about 10 yards out and while the DBFC defence had stopped for what they thought was a clear penalty, the UCCA forward floated a shot over the out coming Luca to drop in the far corner. The half time whistle came with DBFC leading by 2 goals to 1.

The second half started fairly evenly but after 20 minutes UCCA seemed to be a little more tired than DBFC. It was then that some of the nice passing football DBFC were playing came to tell, when Paul played the ball to Rodders who then flicked it in to Chris for a return to Rodders. Paul had pulled out to the right touchline to receive Rodders pass before taking it towards the bar line and looking up to see Chris who had peeled off to the far post and drove in a bullet cross. Chris was thinking this cross was going to be a bit short when the freight train called Thierry shot through the middle of the UCCA box and met the ball at full pace to put a hole in the UCCA net. What a goal to put DBFC 3-1 up.

During the game substitutes kept being made so that everyone got a fair share, so always different faces in different positions. DBFC 4th Goal came from more good play in midfield and Rodders slotting a pass through to Chris just inside the UCCA 18 yard box to hit a low shot into the left corner of their goal. The fifth goal was also by Chris when Martin Schmeltzer received the ball on the edge of the 18 yard box and back heeled the ball to Chis who had run round him to collect and again hit a low shot from the right into the far corner. Then the match finished at 5-1.

An excellent relaxed game of football played in great spirit that everyone on the field enjoyed. UCCA made their appreciation for this game well known and asked for another chance at playing DBFC. This was a worthwhile endeavor that DBFC will organize again. Meanwhile a group of 8 DBFC players made it back to DB North Plaza to enjoy a few bottles and cans of beer in glorious sunshine. 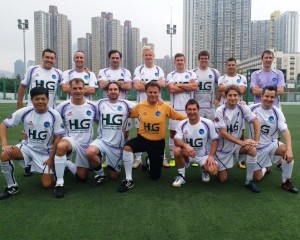