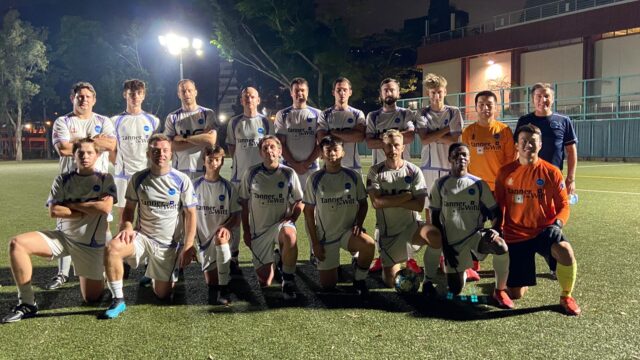 DBFC played their 5th league game of the season against Irish Harps at Aberdeen Sports Ground, needing a win to contest top of the table position. The game was tough right from the start with big tackles and fast pace but it was DBFC that were 3~0 up in a very evenly contested first half. All three goals being headers from corners provided by the boot of young Crompton. DBFC survived some close calls from Irish scoring; They hit the bar and hit the post from a penalty miss. The DBFC defence was under tremendous pressure in the first half and rode their luck to keep Ricky with a clean sheet at half time whistle.

Irish resumed the second half at full throttle but DBFC contested well even with Irish looking the most threatening. A big blow to the team came when after 15 minutes of the second half, playmaker Gary Hancock came off with a bad shoulder injury. After that DBFC lost control through the midfield and it was all Irish attacking. The DBFC defence seemed to be panicking and the ball forward to the DBFC midfielder / attacker wasn’t being held to relieve the pressure at the back. It was only a matter of time for the Irish goal and it came with 20 minutes of the second half remaining, when a defensive header dropped at the 18 yard box for a Irish midfielder to catch it on the volley to put the ball in back of the net. DBFC failed to shut shop and manage the game out from then on and although DBFC were close to a couple of breakaway goals at 3-1 it was constant Irish pressure as they smelt blood. DBFC capitulated and let-in 3 more goals in a space of 15 minutes.

A harsh lesson learned from this game in DBFC being able to manage out a game where the other side have their tales up and a lead needs defending. Nevertheless, we can’t change what has gone so the team accepted the defeat and will move on to improve. The lads still managed a smile over a beer at the pier bar.

MOM: David for winning all headers in his own box in a show of determined defending.

DOD: Kasper for coming on at half time to replace Ricky and conceding 4 goals.