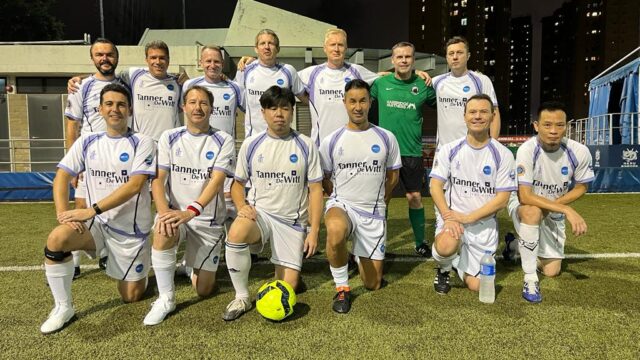 First league game since December and a fixture against KCC, whom we have beaten in our previous 3 games against them. Again not easy getting a squad together and therefore an unfamiliar starting X1. KCC settled quickly and made good use of their “exemption” that allows them to field half an outfield team of 40-45s. We were not playing badly but inevitably a bit of rust in our play. KCC went 2-0 up in the first half but at HT we re-grouped and were confident that we could get back in the game. The first 35 minutes of the 2nd half belonged to us, with Yin creating space in CM on what is a very small pitch and Kieran starting to get behind their defence. We scored 3 times in fairly quick succession: first Yin through to Kieran for a 1 on 1 on his left foot; then a free kick from right wing floated over by OB for a Kieran far post header; and then another Yin / Kieran combination yielding a similar result. We were looking comfortable with 5 minutes to go but an uncharacteristic lapse of concentration on the edge of our box by OB gave their player a simple finish. This gave KCC the momentum and perhaps we should have just got numbers behind the ball and settled for a point. But we allowed them to get behind our defence and their low cross from the right gave them a simple finish. Hugely disappointing after such a good comeback but a very enjoyable game played in a good spirit.