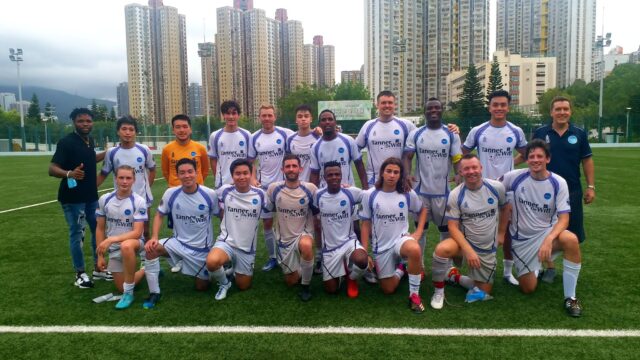 Always a tough game against J Leaguers, especially when they had their strongest team out to try and beat their compatriot Makito-San, so they could show him what he is missing. Their warm up put us to shame, by 4:15 they had warmed up for 30 mins and were well into their long yoga session, whilst we had chatted amongst ourselves, discussed fashion choices with Awal, Ryan tried to juggle the ball and Amit bored us with story after story about his potential upcoming exploits in Kentucky.

Nonetheless, by time kick off arrived, we had stretched, kicked a few balls and huddled around for Tita’s now famous team talks, which can be summarized into a short, sharp, powerful statement:

We started well, very well in fact, and in a quick ten minute spell of constant pressure scores three goals and could have scored more. First goal came courtesy of Awal “Le Fleche” Mahama destroying their LW, CM, LB and CB and crossing for Crommy who feigned a shot leaving Benji well placed for a cracking finish. One nil soon became two nil when Sean put a mega cross into the box for Benji to rise like a salmon and plant a header firmly past the keeper. Then best for last, Makito San robbed the J Leaguer star man, Shun, of the ball and put a delightful lob over for Zoeller to volley in. We could have scored a few more as well.

The first half ended with what was soon to be entered into legal league folklore as the “worst free kick in Hong Kong”, with credit paid to Tita and La Fleche. A short pass to Awal was read and cut out and so ended that move.

Second half, we brought on Bradders at LW, who was keen to impress his girlfriend who is back from Uni, Darius came on at RB and Ryan “unfittest thin dude with a six pack” Lei came on at RW, Danny Loup at CM and big Barry up top. What a sub line up! and we had the returning James to ease in later as well! Great to have wee pocket rocket back for the run in.

We largely controlled the second half and had a few chances here or there, constraining J Leaguers to long shots.

Barry: Spent 20 mins pre game wrapping his wrists… for a footy game
Tita: the free kick and the pre match nap
Darius: Claiming one of his main aims in life is to grow a unibrow
Ryan: great 30 mins and then needing oxygen pitch side
Wai: for being a hard man and only DB player on a yellow
Awal: Crimes against fashion