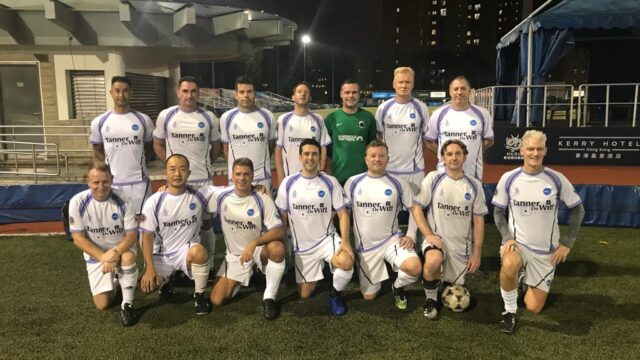 Part 2 of the late night Monday trilogy against KCC. We showed up with same squad but with Mark (GK) and Scotty instead of Newley and Andy C. KCC appeared to have a stronger squad and we knew we would have to be patient like last week. We started the game well with good possession down each flank and well controlled by Morse and Thierry in CM. Again, KCC looked to their quick striker to get behind our back 4 and, although he was dangerous, he lacked the final touch. We scored twice in quick succession mid way through the first half, with similar moves coming down our right side: first a low ball into the six yard box by Mac for Arch to finish and then a similar ball by Scotty for Thierry. We looked in control and did our first rotations to bring on David (LM), Jo (RM) and Resco up top. KCC pulled one back shortly before HT with a corner well beyond our far post and a good finish by them. At HT we had our customary chat about keeping things positive with a reminder from OB of the rigours and fallibilities of old age. We had a great start to the second half with Thierry scoring from long range to the GK’s right side and thought we were in cruise control. The game then got a bit scrappy and we lost some composure, allowing KCC back into it with a strong finish by their player at the back post after a cross from their right. We had some great chances to put the game to bed, particularly a run by David through the heart of their defence with everything but the finish, and then a smart ball from Jo into Resco followed by a sweet turn and shot well saved by GK. Fortunately Simon stepped up to clinch the game with one of our cleanest strikes of the season from just inside the right hand side of the area. After that we saw out the game without difficulty. Good work all round, with everyone putting in a good shift.