After a narrow win last time out against Gazelles, we went into this one with some confidence, knowing that Rovers take the word “Vet” more literally than some of the other teams we have played. As we were to regret , we forsook a traditional warm up to concentrate on a master plan to ensure that everyone would play 2 thirds. And besides , the heavens had opened and the few remaining players with a head of hair were in no mood to get it wet before the obligatory team photo. The game started evenly but it was soon apparent that Rovers had bolstered their midfield with a few young’uns to do the running for the evergreen Mark Grainger. With the referee content to control the centre circle and with no linesmen , the back 4 found it hard to keep a high line, which in turn gave their midfield too much space. But it was CX flyer Kieran who had the first chance as he curled a shot just over the bar from outside the area. This was shortly followed by a narrow escape as Rovers got someone in behind the defence but Stef stood tall to push the ball away – only into the path of another Rovers player who had what looked like an open goal in front of him .But out of nowhere Gazza with a clearance off the line.After 15 minutes Thierry, making his debut for the Over 45s, decided that the pace was too quick for him , and limped off with one of the first calf strains of the evening. Plan B saw Steve come in to join Matija in the heart of defence, shortly followed by Pat as Neil hobbled off after a Dick of the Day backheel moment. With Rovers still very energetic and DB dropping deep, we had a difficult passage of play as we adapted to a slightly different 4-4-2 formation with Oisin supported up top by Kieran McK. But we hung in there and got to half time 0-0.

At half time Gianluca came on in goal but otherwise no changes. We discussed a possible change to 3-5-2 but decided that you can’t teach old dogs new tricks. So we decided to stick with the plan but to try and compress the space a bit better .This worked well – Rovers took off a couple of younger guys and good use of our subs bench meant that we still had fresh legs. We gradually started to get the upper hand and scored a vital first goal – a ball inside their LB for the Doug to run on to , an immaculate cross into the area and a sweet first time volley by Kieran McK .1-0.After this goal we went from strength to strength .A 1-2 on the right of the penalty area by Andy and Paul B ended with a decisive finish by Paul from an angle at close range.We then put the game out of reach as Rovers cleared a corner to the penalty spot and new signing Boudel hooked the ball over his head and over the keeper for number 3. Somewhere in the midst of this the game almost turned into a game of 4 calves – with Thierry and Neil’s injuries followed by OB and Paul. We were suddenly without a subs bench and had to call on big Stef to see us over the line- which he duly did in the last minute of the game as his flick on put Oisin away for a 1 on 1 .Oisin went round the keeper ,re-positioned onto his right foot and finished with aplomb. Game over and a 4-0 win that we could not have imagined at half time.

MOM- no votes taken but very decent debuts from Boudel and Andy. All round strong performances and very encouraging to tough out a win after a difficult first half.

DOD- Neil Jugginns. Having seen Matija pull off an extravagant back heel pass in his own penaly area, Neil tried to emulate 10 minutes later- only to pull every muscle in his leg and to make an early retreat to the sidelines. Next time gents, we are going to experiment with a warm up.

Another enjoyable evening and some well deserved beers . Always a great start to the weekend to win at the Club and thanks as always for their hospitality. 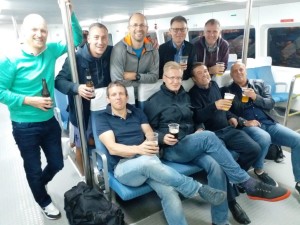