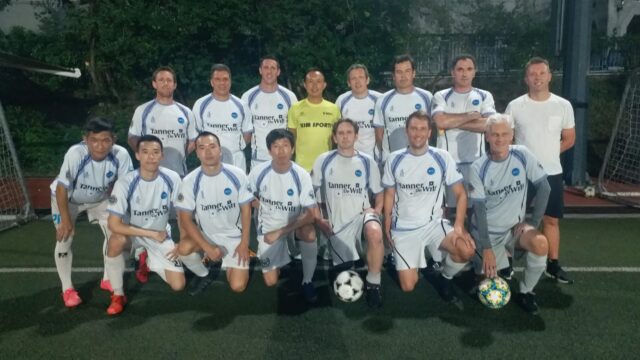 The headline: “DBFC dug in to grind out a 1-0 victory over HKFC at TKO, through a second half goal form Pierre Bakalag”

Just before kick-off Captain Crommy had to improvise on his earlier team plans because four players were lost trying to find the venue. So DBFC started with the bare eleven and Thierry was a limping man with a reoccurrence of his calf strain, which meant playing with effectively ten and a half men. This did not hold back DBFC and the game started energetically with both sides looking to run at the opposition defences. it was DBFC who gradually took control and created the opening chances. Crommy, Pierre and Stephane all saw good opportunities missed but it took a first class save from the HKFC keeper to prevent Chris’s shot curling into far top corner. It seemed that it was only a matter of when not if DBFC would score.

However, HKFC had other ideas and suddenly they took control of the game; DBFC struggled to get out of their half. Bradders pulled off save after save as HKFC players broke through from all sides, and the DBFC defence made many a last ditch tackle. With a couple of minutes to go until half-time, HKFC finally thought they had the ball in the DBFC net only to see lightening reaction from Bradders to dive down to grab the ball on the line. HKFC remonstrated that the ball crossed the line but it didn’t matter because the line referee correctly ruled the approaching play offside.

The four lost DBFC players turned up 15 minutes after the start and when eventually changed and ready replaced Hero Thierry, who came off grimacing in pain. This substitution and two more 5 minutes later may have upset the balance of DBFC play that resulted in the last 15 minutes of the half under the HKFC cosh. No matter why, DB were grateful for the half-time whistle.  HT 0-0.

DBFC regrouped and reorganised for second half and it worked to see them start with new found vigour. After two DBFC attacks nearly resulted in a goal, there was a lovely through ball for Pierre to run through on goal and under strong pressure from the defender managed to poke the ball past the onrushing goal keeper, off the post and into the HKFC net to put DBFC ahead early in the half. 1-0.

The next period of the half saw both sides trying to earn the right to dominate the match, as chances appeared at either end. Eventually, HKFC got on top and, like the first half, spend the remaining 15 minutes peppering the DBFC goal with shots and crosses and wasting some good opportunities to score. HKFC were particularly dangerous with set pieces, filling the DBFC goal box with all their big men. But the DBFC defence held firm to make those chances more difficult and on the few occasions HKFC could have scored, it was Bradders once again who was there to thwart the opportunity with some outstanding saves.

Man of the Match: there were no passengers in this match and everyone contributed to the win but Bradders deserves it this time.