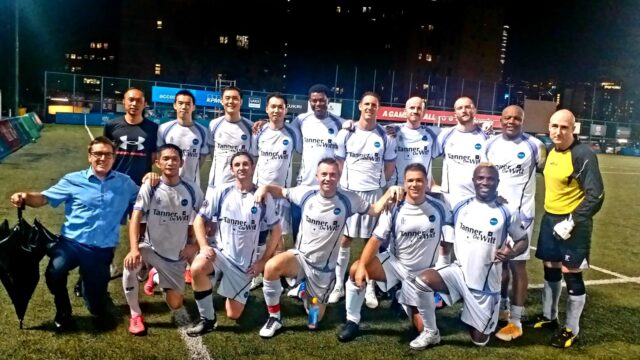 DB extended their undefeated run in the pursuit of invincibility. Most of the players arrived in good time for this game which meant that there was ample time to tie up both bootlaces, stretch and stand in position for a team photograph.

After Gazza’s (few) words of wisdom it was on with the show and what a blistering performance it was. Led by the rabid Dog up front he chased after every loose ball each time he was let off the leash. Dan Moss fired in the first with a cheeky chip reminiscent of a young Phillipe Albert. More hounding of the BTDT defence by Dog resulted in him winning back the (deflated) ball for Crommy to slot home the second and lowered Gazza’s blood pressure to “extremely high”.

Half time it was DBFC Vets 2 BTDT 0 and recognition they worked hard for this. The team talk was for more of the same and that the high work rate would take its toll on BTDT in the second half. A number of substitutes came on to give DBFC fresh legs.

The boys came out firing again and Kwai got in on the act calmly slotting home a well worked move. The defence remained solid marshalled by the indestructible but a bit tired Tita and Rocksteady Riggers. More goals followed with Dog picking up his just desserts and Steph turning on a sixpence to slam home another goal. Dan Moss capped a fine performance with a second goal for himself whilst  wing back Brendan took out his 7 iron and sliced one into the back of the Tseung Kwan O corner flag. A great performance by debutant Jevon and good to have Sean Connelly flying high on the wing again.

In the end BTDT were waving the white flag and were lucky to get 0. Rumours abound of it’s coming home via Uber from Tseung Kwan O and now we look forward to continuing our good form in the next game in a fortnight’s time.

Well done everyone, keep fit and keep up the good work!