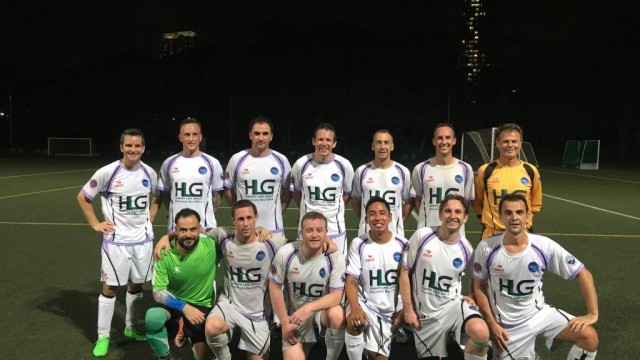 This was the season’s opening match for DBFC in the legends league against FWD Seniors FC and all the boys were raring to go. The desire in the team to play in this match was exemplified by Scotty, coming to the match straight from the airport after landing from Singapore.

Everybody was at KGV on time and after a few words from the player manager (Gianluca) the team line-up was announced, Baz lead the warm-up, which was a compact and intense 87 seconds worth that some players didn’t realise was finished. Morse was left dancing and hi-skipping by himself; he was obviously enjoying it.

It was a shaky start to the game for DBFC against a decent FWD side and the manager was a bit panicky at this. He could feel the stare on his back like a laser beam from the boys on the bench and that prompted him to make a few early substitutions. However, this didn’t immediately solve the disjointed and rushed football from DBFC, so the new guys on the bench continued the laser stares of disapproval (a thankless job as a manager). Things changed soon after when Thierry towered above the FWD defence to get his head to a great DBFC corner kick. This goal shook DBFC in to life and they settled to be more composed with great passing and movement. Confidence throughout DBFC grew and from then on all got much easier. It was 2 – 0 at half time and in the second half DBFC, relaxed and full of confidence, totally out played FWD, who’s heads kept dropping as goals kept coming. FWD was completely smashed.

There was a Moti hat trick, which came in the second half. Moti in the first half was subdued and rumour has it his twin brother turned up to take over in the second half, all fired up and unstoppable. Dom dictated play in the middle of the park and got a brace of goals, the first before half time to settle the team and the second being a contender for goal of the season; a precision pass from Snelly resulted in a superb volley that smashed into the FWD net from 25 yards out. Scotty found a new lease of life in the second half to score the 4th and 6th goals and miss a sitter that would have seen him get his hat-trick (but a game doesn’t go by without one Scotty calamityJ).

Morse was dominating the left wing with skill and commitment, which reminded the manager of Gazza on the left but Morse being slightly slower, without the blue Maldini eyes and definitely having less dancing skills. A wall at the back with Baz, Zin and Thierry, special thanks to Kieran McK and Rainer, who sacrificed their normal mid-field roles to play a great game at the back and accepted without any complaint to the manager. There was lots of sweat and quality from Pascal, Rudi and Rafa. Rafa was unlucky to have a goal, from a perfect training ground set-piece, disallowed. Snelly was making his comeback after knee surgery and the manager was happy to see him back in flow with some quality passing. Alessio had a quiet night but his presence at the game is a big lift for the team. All in all it was a good night with excellent performances from all players.

MOM: This goes to Scotty for having made a great effort of commitment to get to the match straight after landing at HK International airport a few hours earlier and then putting in a great work rate and get two goals.

THE GAME ACCORDING TO PASCAL:

16 players selected for the game. Riggers cancelled late because his family was sick.

So 15 players including 2 goalkeepers.

zin and thierry center back

First 15 minutes, DBFC dominating but FWD defending well and try to play football (I mean passes on the floor, not British football).

A few clear chances not converted into goal and some good saves from FWD keeper against Scotty, Dom or Pascal. On the other hand, FWD got a disallowed goal, their center forward deflected the ball but was slightly offside. It think it has been the only real threat from FWD in the full game.

After about 15-20 minutes, first substitutions saw Scotty (not recovered yet from F1 boozy weekend in Singapore), Moti and Kieran replaced respectively by Dan, Rainer and Rafa.

FWD defense was struggling more and more to push away the repetitive attacking waves and corners from DBFC and couldn’t pass the middle lane anymore.

The opening goal came from a long corner taken by Rafa who found Thierry’s head at the second post.

Despite a clear domination, it was looking like DBFC would return to the water break with only 1 goal advantage but a long ball from Zin, Dom outpaced a big FWD defender and rifled a powerful shot from close distance to make it 2-0.

The referee didn’t even give FWD a chance to kick off and it was half time.

A few motivating words from Gianluca and Pascal at half time. Game looks comfortable but we first need to secure the win with a third goal and then try to score as many as possible. FWD were not very dangerous in the first half but had a couple of players able to create some danger so we had to stay focus.

Scotty came back on upfront together with Rafa.

Pascal took a rest. Formation was now 4-4-2 since we decided to put more pressure on a tired and sometimes dodgy FWD defense.

Surprisingly FWD looked better for the first 5 minutes and loked like they could be back in the game if they can reduce the score. But it didn’t last long and DBFC sealed the victory with a video game goal. Snelly kicked a very long ball high in the air from the middle of the pitch, right side to find Dom at the edge of the box on the left side. Dom’s volley, despite it didn’t make the expected noise, found a perfect angle and rolled past the second post under they eyes of a helpless goalkeeper. Tha was the end of the suspense.

The 3 subs were made soon after, Pascal came back on for Rudi as center mid, Kieran replaced Baz at right back. Moti entered left mid, pushing Rainer to left back and Morse out. Several subs but no natural defenders so those substitutions/positioning aimed to give game time to everybody and not change the same players several times. Gianluca had a hurting back and let Alessio play the full game.

The next 15 minutes were a lesson of football with DBFC finding the net at almost every opportunity.

Scotty then scored another one, entering the box from the right side and easily finished after the FWD center back totally missed the ball and left the ball 5 meters from the line. Not the best goal but a good reward from Scotty who came straight back from the airport with his luggages.

It was 5-0 now but DBFC was still thirsty and felt like they could still score more goals and improve their goal difference which we know very well can count at the end of the season.

A few more substitutions, Dom having a deserved rest and Rudi coming back on.

Moti then decided to take things in charge and scored goals number 6, 7 and 8.

goal number 6: counter attack for DBFC, Moti is launched on the left side and despite a very tight angle decide to strike instead of passing back to Rafa. His strong shoot hits the post hard and the ball bounced very far where nobody was. Pascal recovers the ball and shoots from long range. The ball hits the cross bar again and comes back to Rafa who shoots on an abandoned keeper who managed to save it but the ball goes back to Moti who finishes it. Another video game goal!

goal number 7: another counter attack sees Rafa giving the ball to Moti on the left who enters the box and strikes another powerful shot who finishes on top left corner.

Finally the last goal comes from a through pass from Pascal to Moti. The goalkeeper goes out but is tool short and Moti managed to find the nets from an impossible angle into the emptied goals.

Soon after, the lights went off and referee had no choice but to blow the final whistle. FWD wouldn’t argue to play a few more minutes.

Final score 8-0. DBFC managed to score many goals against a weak opposition who got very tired in the second half.

The very positive point is that we have been very efficient. 2-0 was a good result at half time and it didn’t look like we would score 8 in the end. HKFC beat FWD 6-2 the week before so we can consider job done for this game.

Thierry (not a DBer anymore), Scotty, Baz and Pascal paid a short tribute to the Pier Bar.

MOM: I will only nominate players as several guys deserve it.

Dom was the best player on the pitch, classy and efficient.

Scotty, despite a disappointing start, ended up with a brace that could have been a hat trick if he didn’t miss an open goal at the end of the game on a back pass from Rafa. Scotty desrves to be mentioned because he could not even have a drink at the Pier Bar and just wanted to find his bed back.

Moti scored a late hat-trick and showed we can count on him to score goals.

Thierry was solid, dominating in the air and broke the seal with authority. Zin did a good job clearing the half chances FWD created.

Anybody else did their job in a good spirit.

DOD: I can’t think of anybody.