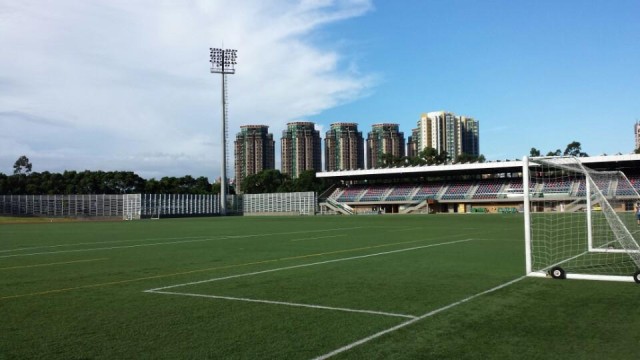 Scorer: Own Goal (cross from Chris)

This can go down as a bad day at the office for DBFC, who clearly had the better footballing talent out on the field but were out-battled for the majority of the game by Corinthians. The manager failed to get the DBFC tactics right against a side playing 5 at the back, a compact 3 in midfield and two up two and just pump the ball long up the middle. The choice of wrong tactics was made worse by many DBFC players having an off day with their football, heavy touches and passing accuracy.

DBFC looked sluggish from the kick-off and struggled to get the ball down and under control. DBFC were struggling dealing with Corinthians long balls up the middle on the very bouncy pitch. The ball bounce and speed was variable in different parts of the pitch. So from the sideline it was an awful game of football to watch. Nevertheless the boys in DBFC white were coming to terms with their frustrations at playing the football and dug deep to battle it out. Yanou got his angles right to make a few good saves from balls bouncing over the DBFC defence for the Corinthians CF to burst through after. DBFC were not making use of the wings with fast Darius and Che and when the ball went out there they often had heavy touches that ran through to the Corinthians keeper or out of play and both were guilty of allowing the opposition defenders out muscle and bully them. This however, is a learning experience for the young stars. DBFC perseverance paid off just before half time when Chris peeled off the Corinthians CB into the left edge of their 18 yard box to collect a through pass from the DBFC midfield and rifle in a low cross towards Matt Hoare running in on goal at 3 yards out. However, a Corinthians defender slid in to intercept the cross only to get a toe on it and deflect into the Corinthians net.

At half time everyone was asked to reflect on the bad footballing performance and try to make amends and battle back hard at Corinthians. Nathan came on for Morse at left back with a reminder for the DBFC defence to keep it tight and clean.

The second half kicked off and the ball played back to David who threaded the ball into midfield for Matt H to make a first time pass back to Thierry, whose control touch was heavy and allowed a Corinthians midfielder to win the 50/50 challenge and press forward. Pascal came round to cover but the Corinthians player’s cross luckily went through his legs in full stride and the Corinthians CF got to a low cross first at about 20 yards out to shoot and this took a wicked deflection off a DBFC defender into the DBFC goal. So the scores were 1-1 after only 3 minutes of the second half and now Corinthians had the upper hand and pressed a deflated DBFC. The boys from DBFC battled hard for 10 minutes but still they did not manage to get the football working. Changes were made for the last 30 minutes with Jamie, Darius and Che coming off for Dan K, Sam and Furqan and Matt H moved back into mid-field with Pascal. This change of fresh pace seemed to start DBFC to get back into grips of the game. Another change was made with 20 minutes left and that was Morse coming on at CB for an injured Thierry (from a Corinthians heavy tackle). There was new vigor in the DBFC attack and they pressed the Corinthians goal for a winner. Chris had a couple of decent chances and Darius (back on for the last 5 minutes) missed a golden opportunity coming in at the Corinthians far post. Also with only a couple of minutes remaining a short pass out by the Corinthians keeper got his defence into a panic and his resulting kick out fell at Chris’s feet at 18 yards out but the pace was too fast and his attempt to control a side-foot return into an empty net sailed agonising over the bar by half a metre.

Although we didn’t lose this game it felt like a loss and beers back at the Pier bar just didn’t taste the same. So we had lots of them to lift the mood.

MOM: Yanou for changing his social arrangements to be our Keeper when both our back-up keepers were unavailable and having a good confident game and saving a couple of one on ones.

DOD:  Gazza for failing to change the game tactics to address the opposition’s set up and failing to uplift the team with positive instruction at half time.