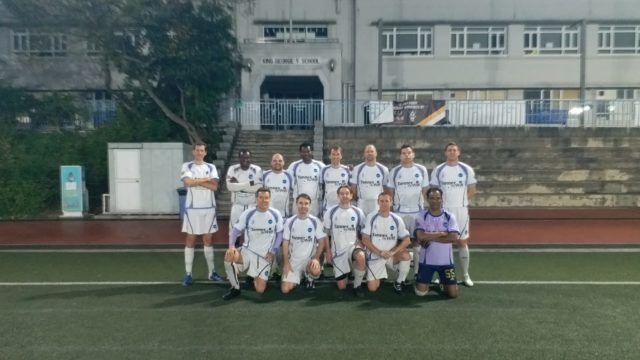 Scorers: Steph (1)
Monday 9th December at KGV, KO 21:00 pm
Squad: Steve, Steph, Pascal, Morse, Gazza, Matija, Akosah, Dom, David B, Riggers, Travis, Rich, Amin, Sanju.
Initial subs: Travis, Dom, David
This was the last game before the Christmas break and the DBFC Vets squad morale was at a nadir following 8 games with only one point to show. Getting a squad out for the game was a challenge, the prospect of competing against the all-conquering Godfathers team, who had beaten DBFC Vets 6-1 earlier in the season, was not as tempting as Christmas parties for many of the team. After a few desperate messages though 14 DBFC Vets stalwarts showed up expecting the worst but hoping that we could give a good account of ourselves. DBFC Vets set up with the aim of stopping Godfathers attacks in a defensive 5-3-1-1. In the crucial back three DBFC were strong, Matija playing alongside Riggers and Morse, with Gazza and Steve offering width in the wing back positions. In midfield the three tasked with strangling the Godfathers midfield was Pascal, Steph and Rich with Akosah ahead of them to provide some creativity and Amin up top looking to trouble the Godfathers back line.
The game started slowly, pleasingly the new formation saw a lot of control from the back, the back three were rarely troubled with the additional man in there helping to sweep up if Godfathers ever threatened. DBFC Vets grew into the game and Gazza found himself as an attacking outlet. New player Travis coming on at right wing back also saw some joy against his opposing full back whilst the midfield coped well. After around 20 minutes with the scores level and chances at a premium Dom subbed on for Rich and was an immediate threat with his dogged tackling in midfield. As the half progressed DBFC Vets put together some eye-catching attacking moves with chances for Pascal and Amin a sign that we were gradually asserting ourselves on the opposition. At half time with the scores level DBFC Vets settled in for more of the same in the second half. With fatigue setting in for some players the three subs rotated with David filling in at midfield and Gazza making way after 65 lung-busting minutes. With 15 minutes left a foul on the edge of the Godfathers box saw DBFC awarded an indirect free kick. A well-rehearsed free kick routine between Steph and Akosah went badly wrong, confusing them both, but more importantly the Godfathers defence were also confused for long enough for Akosah to fire an arrow of a strike past the Godfather keeper, 1-0 DBFC Vets. With 10 minutes to go and in an unfamiliar position there were elements of panicky play for DBFC Vets, Morse, Matija and Riggers though provided defensive stability. With 5 minutes on the clock a DBFC Vets break saw Dom get hold of the ball, feed Steph with a slide rule pass, the striker coolly rounded the keeper and finished to put DBFC Vets out of sight and guarantee our first win of the season. A fantastic team performance, from stand in keeper Sanju all the way through the core gives us something to build on in the New Year.
MOM: Morse at the back. Could have been any of the back three but Morse’s positive chat and organisation was crucial.
DOD: No one, a great performance.