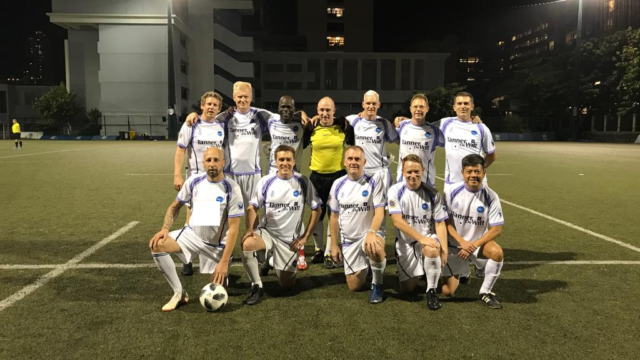 A frustrating evening for the 45s, looking like we were going to cruise for about 30 minutes but then quite fortunate to finish with a draw. We had a strong starting line up of real 45s with a 3 man central midfield and 2 wingers and USRC had their usual mixture of younger and older vets. As is always the case at USRC on a Friday evening, the game started energetically and we soon dominated possession but without any end product. Fouad in particular was causing big problems for USRC with his surging runs. After 25 minutes we scored – a pass from the half way line into Fouad, dummied by him and El Tel reading the play to collect and put past the GK. We immediately made our first subs with Pedro, Martijn and Juggs coming on for Steve, OB and Kieran C. El Tel was soon centre stage again with an opportunity to score from a penalty but he hit the post. We were soon to regret this as Fela gave up possession just inside their half and USRC broke down the wing and crossed for a very decent volleyed finish to make it 1-1 at HT. The second half was a very disjointed affair, partly because of our frequent rotation policy that resulted in a lack of continuity in some positions. Fouad stepped up to score with a free kick from outside the box to make it 2-1 but USRC deservedly pulled one back 15 minutes before the end. By that stage we had lost our rhythm and were happy to get to the club house for beers and curry at 2-2.

MOM – probably Fouad, a complete stranger in our half but always a threat in the opposition’s half.

DOD – Fouad, for his kit violation (and for the rest of us for not noticing until we saw the team photo).