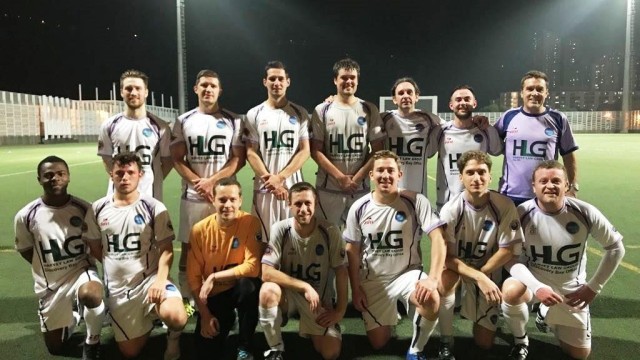 We needed a good performance this week after our shock loss against USRC in our last outing and that’s exactly what the boys provided —- an excellent game of football played by DBFC, full of passion, commitment and skill.

However, on Friday night it didn’t seem to be lining up as though we would have a full squad with only 9 players confirmed to play and 4 players being maybes. This turned worse when two maybes, JB and Thierry, couldn’t make it, so gaffer Gaz got his boots out of the cupboard and polished them up just in case! Fortunately this back-up plan for Gaz to play was looking unlikely by very late Friday night when Tom Halder came forward to help out and Darius confirmed he would play despite an ankle injury. Even more good news came on Saturday morning when Chris Ingham managed to juggle work arrangements to be available and at 1:30pm Saturday Jamie Bone confirmed. So we had a squad of 13 players and a great looking squad at that. Gaffer Gaz was a happy man J

HK Scottish, who was sitting 3 points behind DBFC at 3rd place in the league table with a game in hand, had turned up with 5 subs and their players were obviously up for this game. However, it was DBFC who took control from kick-off and were creating many chances. The DBFC back four were dealing well with any Scottish attack and the DBFC centre-mid of Pascal and Steve Lang were working hard preventing the Scottish midfield from settling, to allow Jamie on the left and Darius on the right to push on. Tom H and Chris were working well off each other and causing the Scottish defence no end of problems. The first goal came at about 20 minutes in when Morse played the ball down the left wing for Jamie, who controlled and turned it inside for Halder at the edge of the 18 yard box. Halder jinked and turned then curled a lovely right foot shot over the Scottish keeper and in at the far post. DBFC dominance continued and the second goal came 10 minutes later from a power header by Chris Ingham who timed his run into the box perfectly to meet Halder’s corner. It was 2-0 at half time.

At the half time team talk gaffer Gaz praised the work rate and commitment given by every player and asked for more of the same. The team would start the second half without substitutes being made but would look to do changes after the first 10 minutes.

The second half kicked-off and DBFC immediately pressed for another goal, with Tom and Chris getting lots of possession and half chances. The third goal came from a Chris Ingham penalty at about 15 minutes in. Tom Halder took a corner and Ingham got a head to the ball but was straight at the Scottish keeper who parried it back to Ingham and his first time poke back at the Scottish goal was stopped by their centre-back’s hand. Scotty Holmes came on for Darius after this goal and 10 minutes later Tom Halder got DBFC’s 4th goal after good play in midfield got the ball to Ingham on the half-way line and he turned to pass the ball through the middle into the path of Halder’s bullet run. Halder made no mistake slotting the ball passed the out coming Scottish keeper. DBFC continued to press but just couldn’t convert a number of more opportunities until the last 2 minutes when Halder collected the ball in the middle and played it out to Jamie Bone coming in on the left. Jamie skinned two Scottish defenders to get to the by-line before cracking a bullet shot from a narrow angle over the keeper and in off the top of far post.

This was a great win and 11 of the team made it back for celebratory beers at the Pier Bar.

MOM: A number of contenders Chris and Tom at the front forming a good attacking partnership to get 4 goals between them and Jamie Bone for a great performance and work-rate on the left and a good goal just reward. However, in a close call, the award this week goes to Chris Ingham for a classical Centre Forward performance.

DOD: Not much to choose from this week so the only moment of dickedness during the game was from Rodders in the first half. Scottish passed a hopeful long ball behind our defence to the left wing with no Scottish player anywhere near and Rodders, who was having a decent game, walked after it has he watched for it to go out to touch some 20 yards away from him. At this point the team thought Rodders was pulling out a packet of cigarettes to light up as he wonders nonchalantly after the ball. The Scottish right back, some 50 yards away, saw Rodders floating in the clouds and decided he’ll make an effort to get there. The Scottish player did get the ball and proceed to the DBFC by-line to put in to the box a dangerous ball. Rodders needs to realise that when his team mates shout to let the ball go out that it is not an excuse to stop for a cup of tea.