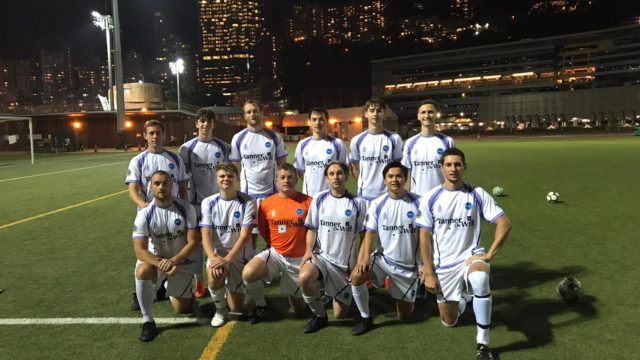 In direct contrast to last weeks build up, DB were out of sorts before the whistle blew for kick off. 5 starting line up dropouts only hours before kick off meant a full team reshuffle whilst warming up. This seemed to take the mental edge of the boys and the warm up seemed a little slow and dis jointed – a sign of things to come.

The first 15 mins were a tight arm wrestle with both sides pressing for early dominance and pushing men forward. Ethan continued his good form on the ball, however missed the go forward from the usual attacking midfield. Marco and LT returned to the line ups and provided a boost to the squad with some strong on and off the ball runs being made in and around the box.

A free kick given away 40 yards out lead to the opening goal, with a cross/shot being lobbed in to the box and throwing stand in keeper Scotty off his game, lobbing in to the back of the net. From there it was an uphill battle to chase the game, with the big bodies of Scottish repelling the constant attack through Enzo, Ethan and Marco. The second Scottish goal cane from An unmarked midfield run allowing a squared ball to be tapped in with 10 to go before half time. Just before the whistle went for half time, a brilliant cross was whipped in by the Scottish striker to be met by a bullet header from his stoke partner, only for scotty to deny him through a miraculous 1 on 1 save. 2-0 half time.
The second half started much stronger for DBFC and the pressing looked to have paid off on a number of occasions with Ethan hitting the bar twice and Enzo hitting the bar as well. However a quick throw against the run of play allowed the Scottish striker in on goal unmarked and he neatly slotted the ball home to kill the game off at 3-0 with 15 to go. Whilst DB continued to press, the final finish could not be found and Scottish lobbed a long ball up field for the last kick of the game which found their striker racing through on goal with Dan covering well, however a cut back saw him pick out his midfield backing up and it was slotted for 4-0. Very dissapointing result in what should have been a much tighter game. The Tanner De Witt man of the match goes to Christian for his second game back in a gutsy performance that had him lead the line in defense and continue to push the team for the entire game. A must win next week and expecting to see a full squad back