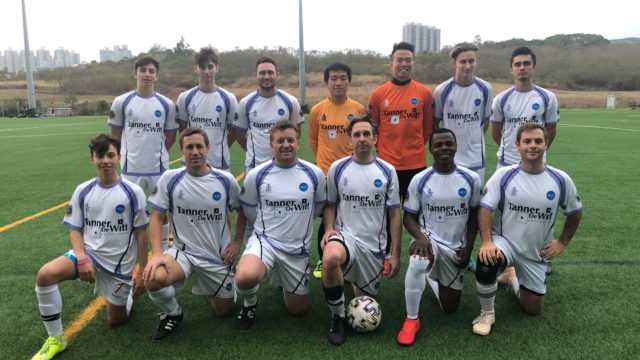 DBFC made the long trip to HKFA pitches to take on Wanchai Spartans, a team that stood 2nd in the league. DBFC brought a strong squad with the addition of James Dean put in a very solid performance in the centre of the park, to an already strong DBFC midfield. The game kicked off under the lights and DBFC put in a very sturdy defensive performance before the referee made the first of many controversial decisions by determining that Ricky had picked up a back pass, despite the ball coming off the shin. From this Spartans belted and effort which took a massive deflection and floated into the side net. A goal that should’ve been called off for an offside. A debut goal from James Dean moments later scored the game at one-a-piece in an already entertaining affair. Moments later the electric Ethan Squires plays the ball through to Darius who gets his shot off into the bottom corner whilst taking a massive kick from a Spartan defender in the process to give DBFC a thoroughly deserved lead. However, moments before half time Spartans fizzed a ball low and hard into the box from DBFC’s right hand side but a miss kick from an often reliable Leo Predieri led to Spartans’ equaliser just before the end of the half. The second half begins and both teams battled hard searching for a 3rd goal. Not many chances were created before a Spartans’ player belts a volley from 30 yards coming very close to finding the target. Both keepers made many important stops to keep their teams with a chance of snatching the game in a decisive fixture. Unfortunately, Spartan’s got the final word as they floated a ball into the box with a failed clearance leading to a left footed curler from the Spartan’s substitute giving them a rather undeserved lead who has the wind to thank for his wonderfully placed shot in the top right corner of Kasper’s net. DBFC come away with nothing but showed many positive signs throughout the game before the final stretch of the season.