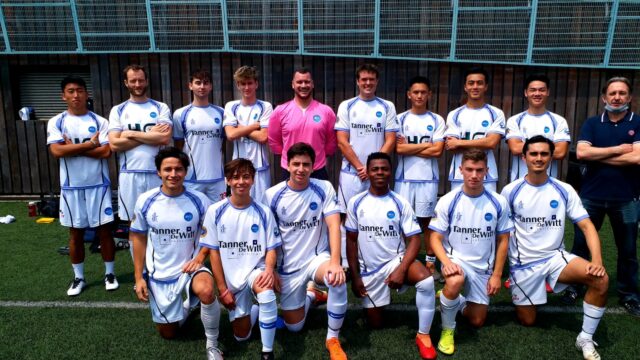 This was a much  changed DBFC squad and starting line-up with old guard Morse and Crommy resting sore legs, Ricky tearing it up at an Esports tournament and the dynamic duo of Zoeller and Brendan taking on the Lantau trail for a very worthy charitable cause. Also a couple of new faces were introduced at this match; Zanskar and Daniel.

Pre-game talk centered around the fact that Corinthians (Corrs) would be organized and dangerous on the long balls and we should not take their position at the bottom of the league division 1 table for granted. And so it proved in the first 15 minutes, with DBFC struggling to hold on to the ball and Corrs competing well in midfield.

As the first half progressed DBFC settled into the game with some flowing football and Ethan started to look particularly dangerous in threatening the Corrs goal. This settled football resulted in DBFC’s first goal, directly from a free kick at 20 yards out, won by Ethan and taken by Ethan. The second soon followed with Matt Hoare heading in at the far post from a free kick on the right wing taken by new star, Zanskar. The third came just before half time and was a goal that DBFC deserved from open play, when Matt Hoare made a strong surging dribble to the byline to fire in a cross that Enzo ran onto for tap-in..

Corrs had some decent chances in the first half, which Travis and the defence dealt with well – so 3 nil up at half time was a good return.

Second half we brought on a number of subs. Ryan and Stevie Lang were  strong in the mid-field and Dan Yen came on at RB for a solid performance. David Z had a decent performance at CB.

The half was a fairly scrappy affair (maybe because of many DB changes) but DBFC maintained having most of the possession with Corrs not creating any chances of note on the DBFC goal. The game was made safe when Steve Lang scored directly from a free kick about 25 yards out, which he considered fortunate to have slightly deflected off a Corrs defender to foul the Corrs keeper.

MOM went to Leo for another great performance.

DOD went to Ethan for being less than happy when subbed off late in the game to give Leo  a run upfront. Harwood was a close contender for this award for coming off with the excuse “I’ve got a stitch”.