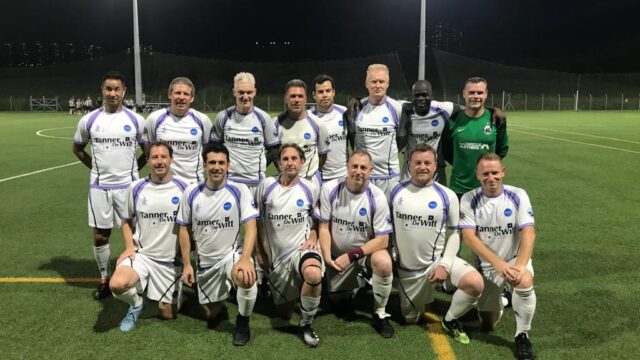 Our final game of 10 in our mini-league against SIA who, thanks to a forfeited game by USRC, were already league champions. Nevertheless, as the only team to beat SIA, we were keen to do the double on them. After a certain amount of kidology with SIA not wanting to venture away from Happy Valley and apparently struggling to field a team, SIA showed up with a squad of 17, including some last minute recruits from Krauts. We were focused before KO, but not necessarily on the game: Simon attending the team photo whilst still on a conference call. We started as a 4-4-2 but were nervous in possession, often not finding a simple ball out of defence and not getting good ball to our front men. SIA were generally more aggressive but did not create much except for their usual long throw routine. We dealt with the first few OK but after about 15 minutes SIA’s striker flicked on a long throw past Mark. We reacted well and soon equalized after their defender, under pressure from Resco, put into his own net from O’B’s corner. We started playing with a bit more composure – Kieran hit the outside of the post from a tight angle and Fela should have converted in a goalmouth scramble. HT 1-1 and we thought we had laid a strong foundation to go on and get a win. For the first part of the 2nd half we looked in control but no clear cut chances. Mac, Kieran and Ben all came close but SIA scored what would be the winner with about 10 minutes to go: their striker receiving the ball about 10 yards behind our CBs, but somehow ruled onside, and finishing with ease. We pushed more bodies forward but were unable to equalize. As with the loss at USRC, we were not sure how we had come away with nothing but we only had ourselves to blame.