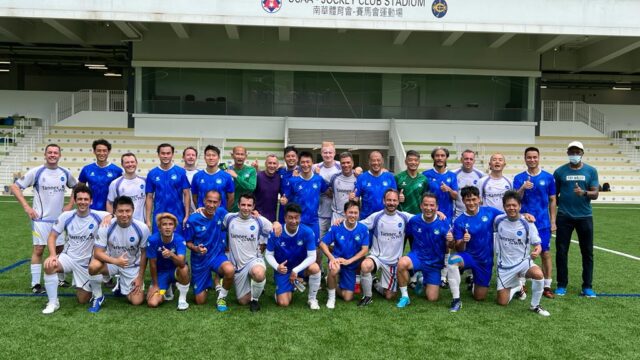 This was a new opposition for the 45s, another team of ex pros introduced by Kieran C. After a 6 month break due to the lockdown restrictions, we knew this would be a tough re-start but we didn’t realise how tough. We struggled to get a team but can have no excuses – we were simply outplayed by a very good side. On a big pitch in sweltering heat in the magnificent facilities of SCAA, we had a simple game plan: we expected the opposition to control the majority of the possession but we wanted to keep our shape, get numbers behind the ball when they were in possession and try to keep things simple in possession. But, to borrow from Mike Tyson, everyone has a game plan until they are punched in the month – in our case 3-0 down after 20 minutes of relentless dominance by the opposition. Both sides made some changes at a water break at that time and Fai Yeung brought a few older guys on but it continued for the most part to be one way traffic. On the plus side we kept going and stayed positive with each other – in particular Baz and Simon had their work cut out to stem the tide in central midfield and Pedro and Steve struggled to hold a line at the back. After about 25 minutes, we did score but unfortunately it was a Steve OG, a first time pass back to Resco after receiving it under pressure. Of course there were a few individual errors but for the most part it was difficult to stop them as they consistently got runners behind our defence after pin-point passing from the midfield. The only time they scored when we had numbers behind the ball came from an excellent cross from LW that evaded Ben at LB, from which their striker had a clear header. Just before HT Stephane was unlucky not to get a penalty after the GK connected with him in a 1 on 1 – this resulted in a trip to hospital to get some stiches. At HT we were 0-6 and Baz replaced Resco in goal. Early 2nd half we then lost Simon who went off to referee Legal league. We did manage to get a consolation goal after Greg’s tireless efforts up front but unfortunately Fai Yeung went on to increase their tally. On one occasion, Baz’s sweeper keeper exploits failed spectacularly as he connected with fresh air and their player waltzed round for a good finish into an empty net. We seemed to find a better position for Matthieu at LM and he came close on a couple of occasions, with one effort against the bar. But basically we ran out of bench and had no fresh legs to match the opposition’s frequent rotations. We were relieved to hear the final whistle and our team photo with them was at least an opportunity to get closer to them. A good showing in the bar overlooking the pitch and not too many onlookers seeking autographs. In the final analysis, this was about as enjoyable as a complete tanking can get and hopefully we can be more competitive with these guys next time. 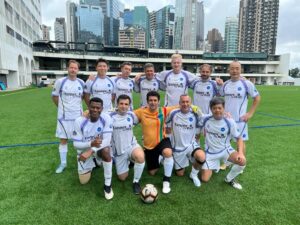